Marks, Strokes & Scribbles: A Survey of Drawings is an exhibition featuring drawings culled from different bodies of work produced over the past twenty years. Drawing as a medium is an important part of Meza-DesPlas’ studio practice. While drawings can be produced as quick sketches, preliminary drawings for larger works and analytical notations, Meza-DesPlas’ artworks in this exhibition will reflect ‘drawing’ as the end product – in and of itself. This exhibition is comprised of hand-sewn human hair drawings, human hair drawings cast in resin, vinyl applique drawing installations, on-site drawing installations with conte, and mixed media works encompassing a variety of media such as graphite, thread, and specialty fabric.

Meza-DesPlas began to sew with her own hair in 2000. Hair is sorted into various lengths, dyed to emulate an array of values and tones, and threaded through small embroidery needles. It is sewn into canvas, mylar and various art papers. Between the years 2001-2004, Meza-DesPlas achieved a three-dimensional appearance by casting her hair drawings into a 3-layer resin. The utilization of hair as a vehicle for art-making is informed by socio-cultural symbolism, feminism, and religious symbolism. In 2018, she began to create hand-sewn human hair drawings with her gray hair. The Huffington Post Arts & Culture section featured her hand-sewn human hair drawings in 2015.

In Meza-DesPlas’ hands, drawing, as a traditional medium, has been expounded upon to arrive at non-traditional methods for mark-making. Her studio experimentations yield numerous avenues for what a drawing can be; thereby, the definition of drawing is smudged, erased and redrawn.

Pictured below are images of the wall drawing installation at Fort Lewis College Art Gallery. Normative discontent is a term coined in 1980s about a woman’s dissatisfaction with her body image. The last series I worked on revolved around Audre Lorde’s The Uses of Anger. I showed these works in Brooklyn in February. These artworks explore the concept of anger as a tool for change by juxtaposing found imagery from social media, art history and mass media. My interest was in how social movements, Black Lives Matter, Women’s Marches, Times Up and #MeToo harness anger in order to forefront an array of gender-based burdens. The current artworks including this wall drawing are an extension of the artworks about ‘anger as a tool for change’ They are about ‘agency’ and are inspired by the lyrics of Beyonce’s song Formation (released in 2016). I am researching images of female politicians who are captured in the throes of anger; in particular, I am looking for commonalities in terms of physical gestures and facial expressions. In addition, I am cross-referencing the contemporary social media images with art historical images of women & agency.  My interest lies in re-contextualizing the phrase “Ok ladies, now let’s get in formation” into a call for action, a rallying cry, a call to mobilize — a contemporary call for political activism.  I was inspired by Rebecca Traister’s book “Good and Mad: The Revolutionary Power of Women’s Anger”, 2018  and “Rage Becomes Her: The Power of Women’s Anger” by Soraya Chemaly, 2018. As a little girl, one is often told, do not yell or do not be angry — it makes you look ugly. The distortion of the face in the throes of anger juxtaposed with the silenced face is of particular interest here. 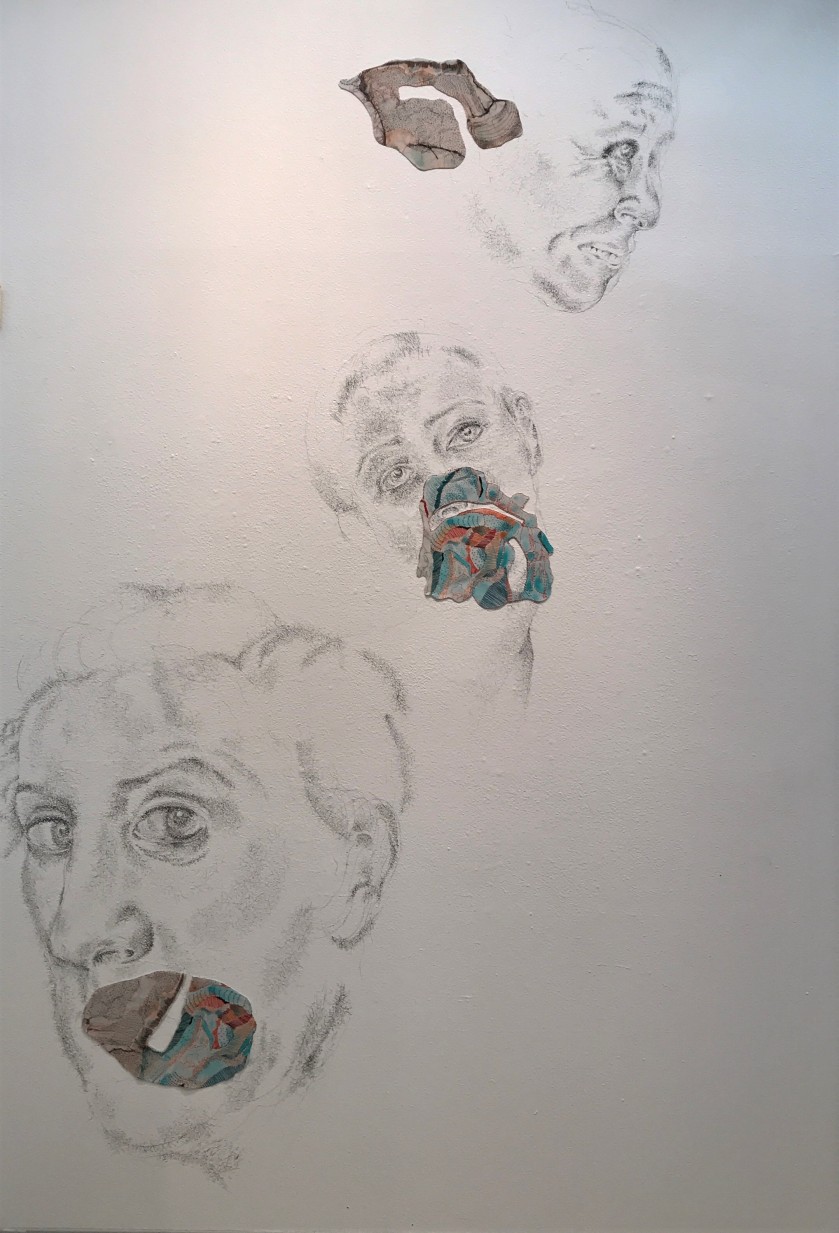 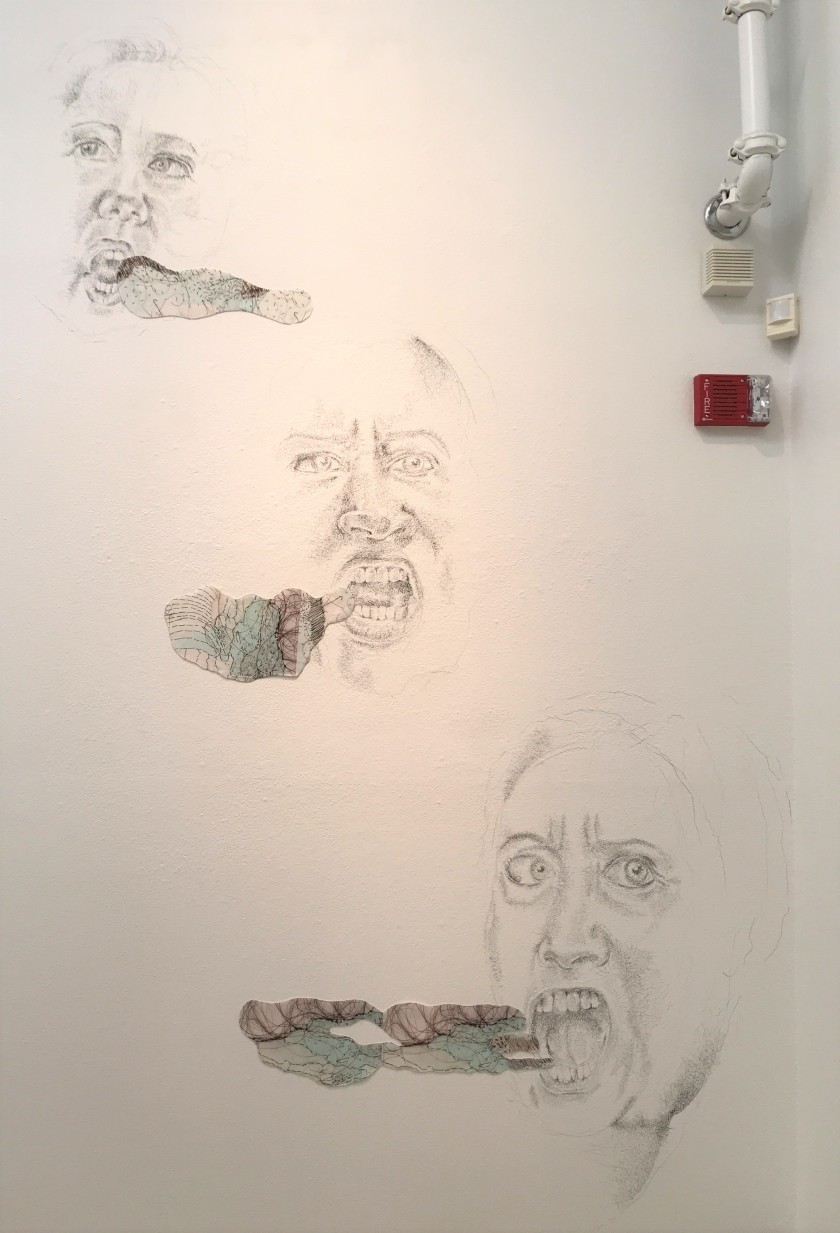 Farmington, NM-based Latina artist, Rosemary Meza-DesPlas is known for exploring gender, sexuality, and identity issues through hand-sewn human hair drawings, watercolors and on-site drawing installations. She received an MFA from the Maryland Institute College of Art and a BFA from The University of North Texas. Ms. Meza-DesPlas has been sewing with her own hair since 2000. Her decision to collect and sort hair to utilize as a vehicle for making art is informed by socio-cultural symbolism, feminism, body image, and religious symbolism. An article on her hand-sewn human hair drawings was featured in the Huffington Post Arts & Culture section in 2015. Meza-DesPlas’ most recent drawings incorporate her gray hair. In 2019, Rosemary Meza-DesPlas was featured in Santa Fe, NM’s the/magazine as “12 Artists in New Mexico to Know Now”. Ms. Meza-DesPlas parallels the themes in her artwork with the written word and spoken word performances. In 2018, she presented the academic paper Reclaiming the Tool of Anger: Year of the Angry Women at the 9th International Conference of the Image in Hong Kong. Ms. Meza-DesPlas’ recent spoken word performances were at the Feminist Art Conference, Ontario College of Art & Design, Toronto, Canada; Center for Contemporary Arts, Santa Fe, NM; ARC Gallery in Chicago, IL and the Durango Arts Center in Durango, CO. View all posts by rosemarymezadesplas