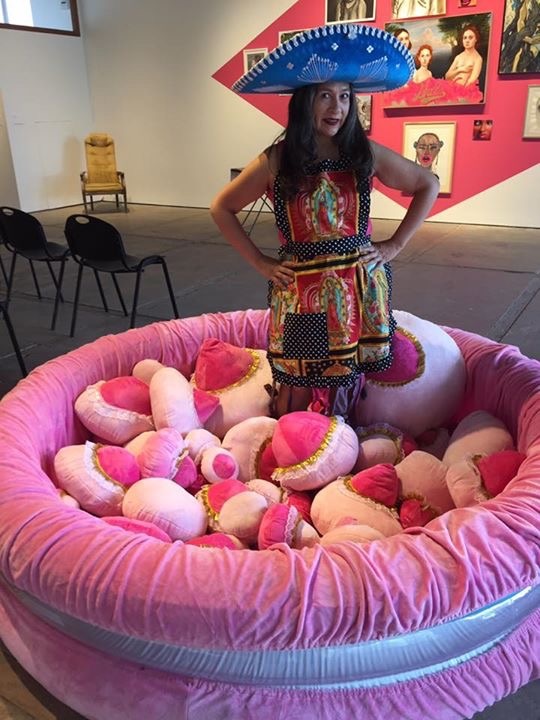 A thousand men in cheap toupees

stained and soiled with falsehoods

One blonde woman in sensible shoes

stands at a podium

under red, white and blue weight

she carries the burden of every woman

look to the ceiling

scramble up the blond hair rungs

of a deteriorating D.C. ladder

One middle-aged woman in a black pant suit

tumble from her shoulders

into putrid puddles of complacency

“I was born and raised in Garland, Texas; a manufacturing-based suburb of Dallas. My parents’ heritage is rooted south of the US border: my mother was born in Allende located in Coahuila, Mexico. My father, born in Santa Maria, Texas, grew up in Tampico situated within Tamaulipas, Mexico. The tenacity of my eight aunts in the face of personal tragedies and adversities was an early inspiration; their narratives contributed to my embrace of feminist ideology.” Rosemary Meza-DesPlas currently lives in Farmington, New Mexico. The cornerstone of her artwork is the female experience within a patriarchal society. As a woman, daily navigation of our world is a precarious tight-rope walk. The use of portraiture to discuss gender-based burdens personalizes the political. Intricate drawings are created by meticulous stitching of human hair. The dichotomy of human hair, depending upon context, is it can be engaging or off-putting: long, luxurious hair is sexy, but a hair in one’s soup is unappealing. Meza-DesPlas seduces the viewer with elegant, sensual marks of hair. Thematically, her artworks advocate for gender equality and women’s empowerment. Through on-site drawing installations and watercolor paintings, Meza-DesPlas evokes intellectual and visceral responses to socio-cultural burdens endured by women; these burdens and their subsequent impact on contemporary culture are interpreted through a global lens. She earned a MFA from Maryland Institute, College of Art (Hoffberger School of Painting) and a BFA from the University of North Texas. Her artwork has been exhibited at numerous galleries and museums throughout the United States, Europe and Asia. Her work has been written about in several publications including the Huffington Post, Dallas Morning News, The Durango Herald, Wall Street International, and Interview Magazine. Ms. Meza-DesPlas parallels the themes in her visual artwork with the written word and spoken word performances. View all posts by rosemarymezadesplas